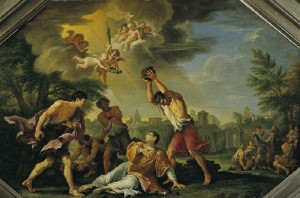 “Stoning of Saint Stephen” by Filippo Lauri, c. 1651. Saul in the extreme right (click to enlarge)

Acts 7:59-60  And they stoned Stephen as he was calling on God and saying, “Lord Jesus, receive my spirit.” Then he knelt down and cried out with a loud voice, “Lord, do not charge them with this sin.” And when he had said this, he fell asleep.

Twenty-one Egyptian men were recently beheaded for believing in Jesus Christ.  Twenty-one brothers in Christ were murdered for our Lord.  I tell you, I am overjoyed for them.  For what better way can one die than for the name of Jesus?  We should count these blessed men as heroes, for they are true martyrs for Christ Jesus. Hallelujah!  Praise God!  Amen!  My heart weeps for their families, for I know what it is to suffer the loss of loved ones to senseless violence.  My prayer is that they realize how special those twenty-one men are.  I pray they feel joy at the thought of those twenty-one beautiful souls frolicking with Jesus in heaven.  Theirs is a place of endearment in the heart of the Lord for there is no greater tribute than to lay down one’s life in the name of Jesus.  I would like you to take a moment to honor these twenty-one brothers.  Pray for their families and praise God for their sacrifice.  I want the enemies of Christ to know that you cannot kill a Christian, for our souls are eternal.  True believers in Christ shall never die.  The devil has convinced you that there is victory in the death of Christians.  He has lied to you.  Oh, there is victory alright; but it belongs to Jesus, not you.

They have gained nothing by murdering our brothers.  They have lost their dignity and humanity.  These men have evil in their hearts.  I know their plan, for it is the plan of our enemy, the devil.  We Christians know that the father of lies loves hate and discontent.  He would love nothing more than to start a holy war between Christians and Muslims.  These misguided men are attacking us in hopes that we will retaliate on all Muslims.  They want us to persecute Muslims because they know that if we persecute Muslims, then it will be easier to recruit more Muslims to their fanatical cause.  The more we show hate towards Muslims, the more of them will take up arms and radicalize.  We must continue to show restraint.  We must only defend ourselves against those who mean us harm.  We must not aid our enemies by radicalizing people who have done nothing to us.  Hate only begets more hate.  We should pray for our enemies, for they are lost souls on a path to damnation.  Woe to them.  May God have mercy on them.

Matthew 5:44 says “But I say to you, love your enemies, bless those who curse you, do good to those who hate you, and pray for those who spitefully use you and persecute you,”
Those are the words of our Lord.  Let us heed them.

Jesus warned us of these times in Matthew 24:

Jesus Predicts the Destruction of the Temple
1 Then Jesus went out and departed from the temple, and His disciples came up to show Him the buildings of the temple. 2 And Jesus said to them, “Do you not see all these things? Assuredly, I say to you, not one stone shall be left here upon another, that shall not be thrown down.”

The Signs of the Times and the End of the Age
3 Now as He sat on the Mount of Olives, the disciples came to Him privately, saying, “Tell us, when will these things be? And what will be the sign of Your coming, and of the end of the age?”
4 And Jesus answered and said to them: “Take heed that no one deceives you.5 For many will come in My name, saying, ‘I am the Christ,’ and will deceive many. 6 And you will hear of wars and rumors of wars. See that you are not troubled; for all these things must come to pass, but the end is not yet. 7 For nation will rise against nation, and kingdom against kingdom. And there will be famines, pestilences, and earthquakes in various places. 8 All these are the beginning of sorrows.
9 “Then they will deliver you up to tribulation and kill you, and you will be hated by all nations for My name’s sake. 10 And then many will be offended, will betray one another, and will hate one another. 11 Then many false prophets will rise up and deceive many. 12 And because lawlessness will abound, the love of many will grow cold. 13 But he who endures to the end shall be saved. 14 And this gospel of the kingdom will be preached in all the world as a witness to all the nations, and then the end will come.

The Great Tribulation
15 “Therefore when you see the ‘abomination of desolation,’ spoken of by Daniel the prophet, standing in the holy place” (whoever reads, let him understand), 16 “then let those who are in Judea flee to the mountains. 17 Let him who is on the housetop not go down to take anything out of his house.18 And let him who is in the field not go back to get his clothes. 19 But woe to those who are pregnant and to those who are nursing babies in those days!20 And pray that your flight may not be in winter or on the Sabbath. 21 For then there will be great tribulation, such as has not been since the beginning of the world until this time, no, nor ever shall be. 22 And unless those days were shortened, no flesh would be saved; but for the elect’s sake those days will be shortened.
23 “Then if anyone says to you, ‘Look, here is the Christ!’ or ‘There!’ do not believe it. 24 For false christs and false prophets will rise and show great signs and wonders to deceive, if possible, even the elect. 25 See, I have told you beforehand.
26 “Therefore if they say to you, ‘Look, He is in the desert!’ do not go out; or‘Look, He is in the inner rooms!’ do not believe it. 27 For as the lightning comes from the east and flashes to the west, so also will the coming of the Son of Man be. 28 For wherever the carcass is, there the eagles will be gathered together.

The Coming of the Son of Man
29 “Immediately after the tribulation of those days the sun will be darkened, and the moon will not give its light; the stars will fall from heaven, and the powers of the heavens will be shaken. 30 Then the sign of the Son of Man will appear in heaven, and then all the tribes of the earth will mourn, and they will see the Son of Man coming on the clouds of heaven with power and great glory. 31 And He will send His angels with a great sound of a trumpet, and they will gather together His elect from the four winds, from one end of heaven to the other.

The Parable of the Fig Tree
32 “Now learn this parable from the fig tree: When its branch has already become tender and puts forth leaves, you know that summer is near. 33 So you also, when you see all these things, know that it is near—at the doors!34 Assuredly, I say to you, this generation will by no means pass away till all these things take place. 35 Heaven and earth will pass away, but My words will by no means pass away.

The Faithful Servant and the Evil Servant
45 “Who then is a faithful and wise servant, whom his master made ruler over his household, to give them food in due season? 46 Blessed is that servant whom his master, when he comes, will find so doing. 47 Assuredly, I say to you that he will make him ruler over all his goods. 48 But if that evil servant says in his heart, ‘My master is delaying his coming, 49 and begins to beat his fellow servants, and to eat and drink with the drunkards, 50 the master of that servant will come on a day when he is not looking for him and at an hour that he is not aware of, 51 and will cut him in two and appoint him his portion with the hypocrites. There shall be weeping and gnashing of teeth.

It is not for me to say when the end of the age will be.  Nor can I tell you if this is the time of sorrows, but I will say we should prepare ourselves.  Only God knows the day and the hour.  If you are right with the Lord then you need not fear the end.  We should celebrate all Christians whom have died in the name of Christ.  I truly hope there are people giving alms to the families of our twenty-one fallen brothers.  I would that I could.  It is a truly brave thing indeed to be a Christian in a land where hate looms all around you.  Thank you, Lord, for the strength you give us to believe in You and defend Your name.  Praise Jesus!  Amen!   I wish I had access to the names of Christians whom have recently fallen in the name of Christ.  I would like to create a memorial page in honor of their sacrifice.  May the Lord grant me a way.  We need to honor our fallen brothers and sisters.  We need to pray for the same strength and courage in our own lives.  Remember this:  Love conquers hate.

May God bless and keep you.  May His martyrs never be forgotten.  May we learn to Love those who Hate.  Amen!
Love in Christ,
Randall