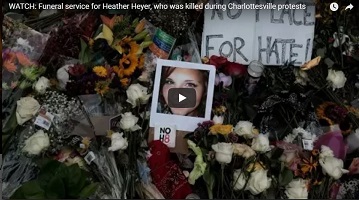 Ecclesiastes 6:1  “There is an evil which I have seen under the sun, and it is common among men”

Dearly beloved:
My GOD! MY GOD! MY GOD!  Please, Father, bring comfort to the family and friends of Heather Heyer.  Oh LORD, let her death not be in vain.  LORD, let the hate mongers fail and fall!  AMEN AND AMEN!!!

I send my most sincere and heartfelt condolences to the LOVED ones of Heather Heyer and all those who have suffered loss due to the wickedness of hate.  My beloved, I am angry, hurt and outraged over what is happening in the streets of America.  A brave and beautiful person named Heather Heyer was murdered by a confused, racist coward in Charlottesville, Virgina.  I am proud of Heather for standing up to racism.  I am proud that she was white and yet she stood up for people of color like me.  I am proud of her courage and patriotism.

As I sit here watching events unfold, I am struck by the fact that people are actually fighting to keep statues of American traitors and tyrants.  Why not put up a statue of Tim McVeigh?  He was a white supremacist terrorist traitor who attacked his own country just like the confederates.  It would be equal to the statues of confederates.  This is America and we ought not celebrate tyrants who seek to destroy what we stand for as a nation.  They should not be exalted.

As I watched the news, I saw white nationalists wearing army fatigues and marching with rifles and I couldn’t help but wonder how the police would have responded if they were black men marching with weapons?????  I think we all know the answer and if you don’t, you better wake up. White Nationalist???  Really????  Alt Right?????  Make America Great again??? (A.K.A make America white again!)  Ku Klux Klan members calling themselves Christians??????  I heard the president, Mr. Donald Trump, saying that this country has not been attacked by terrorists since 9/11.  Apparently white people cannot be classified as terrorists.  The truth is, we are attacked every year by dirt bag terrorists of all colors.  Mr. Trump has become the great leader of all ignorant losers who believe that a person’s character is determined by their skin color.  The idiots hail him as the savior of the white race.  They believe that he will restore ignorance and stupidity to the country.  Satan is having a field day right now.  He loves this.  Donald Trump is the best thing to happen to evil since Hitler.  He’s even got the same type of gullible people following him that Hitler had.  Business is good in hell right now.  Not even Osama Bin Laden caused as much contention and division.

I am sorry for the negativity, but I am very hurt by what is happening in my country and the world.  Hate is very painful to all mankind.  Hate only breeds death and destruction. I am a firm believer that hate and love are the most powerful forces in existence.  I believe that mankind has only two emotions – hate and love.  Sadness, anger, happy-ness, peace, joy are all variations of those two emotions.  I have great news.  Love is the most powerful.  Hate can never defeat love.  NO SIR!  GOD IS LOVE AND LOVE IS GOD!!!!  We who believe in and worship LOVE are greater than any and all haters!!  THANK YOU JESUS!!!  HALLELUJAH!!!!!  PRAISE GOD!!!!!  Oh YES!  I am fired up!  I am angry!  But my anger is righteous!!!  My ANGER COMES FROM A LOVING GOD,WHO GAVE ME A LOVING HEART AND TAUGHT ME TO FIGHT HATE AND EVIL!!!!  He knows my heart!  Not enough people are angry at hate.  It is okay to be angry at hate.  That is the only type of anger that is okay.  For it is righteous anger.  Even JESUS had righteous anger (see Matthew 21:12-13).  We need to be angry at hate so that we can fight it with fiery, righteous love.

I saw people in my home state of Massachusetts standing up to hate and I was never more proud to be from Massachusetts.  I watched the governor of Maine, who is a proud white nationalist and racist, act indifferent to what happened to Heather Heyer and I was embarrassed for his state.  I myself was wrongfully convicted by an all white jury in Maine and accused of being guilty because of my color.  As I fight to overturn my wrongful conviction and educate those who are ignorant and racist in Maine, I have hope that LOVE will make me a free man some day.  I believe that GODS LOVE WILL SET ME FREE!!!!

I love Heather Heyer and people like her who stand up for persons of color who are being lynched by a racist system.  I will never forget her.  GOD has used her death to open our eyes to the truth of hate.  Heather has given me hope that I will defeat this hate that I face in the American justice system.  I pray that GOD will use me, like he has Heather, to stand up to hate.  Heather’s death has inspired me to fight as hard as I can to bring change.  Like her, I want to fight hate and bigotry and bring people together.  LORD, HELP ME DO THAT!!!!  I pray for all of you who are victims of satan’s hate.  I pray for more people to follow in Heather’s footsteps and make a stand against hate In the name of LOVE!!  I ask that you pray for me in my battle with a corrupt, racist judicial system.  Thank you!!!

May GOD bless and keep you!  May He give you the courage to fight hate!  May Heather Heyer never be forgotten!  AMEN!!!
Love in Christ,
Randall
(A soldier of LOVE in the war against hate)

Ecclesiastes 8:8
No one has power over the spirit to retain the spirit,
And no one has power in the day of death.
There is no release from that war,
And wickedness will not deliver those who are given to it.