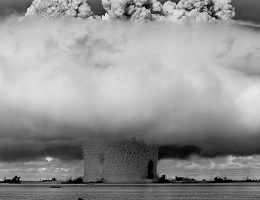 Dearly Beloved:  May GOD’s Grace, Peace, Protection and Salvation be ever upon you.  Folks, we may be headed for a nuclear war. We have all seen the news.  I had hoped and prayed for an end to this madness with North Korea, but it appears that war is inevitable.  Only GOD knows for sure.  As a Christian who has eternal salvation I do not fear for my own life.  I welcome the opportunity to be with my LORD, but I fear for those who are not saved.  I am neither suicidal nor in a rush to die.  I have a purpose and a mission to LOVE and spread salvation on behalf of JESUS CHRIST.  That is my reason for being.  Thus, I must fight at all cost to live.  Like all Christians, I am duty bound to serve the LORD in this way.  Right now, I fear not for myself but for my family members who are not saved and all unsaved people all over the globe.  I want to see all of you in Heaven.  I want all of you to have the assurance that I have in the LORD.  All of you out there in the free world are the reason this site exists.  I am not some “doomsday prophet”.  The LORD has said that we neither know the day or the hour of His return and He meant it.  I know a lot of you are scared right now.  You know who should be the most frightened right now?  The people who have not accepted the LORD as their Savior.

This threat we now face is not just an American threat.  This threat is a world threat.  It affects all of us.  This is the biggest threat our world has faced since World War 2 and the Cuban Missile Crisis in the sixties.  We had to come together as a world then and we must now.  It is sad, but it seems that the threat of world destruction brings us all closer together as global citizens.  Kim Jong-un is the evilest tyrant we have faced since Hitler.  He is a sociopathic dictator who forces his people to worship him as a god.  Make no mistake about it, if we do not stop this narcissistic megalomaniac with delusions of grandeur (which is a fancy way of saying he is a psychopath), it is very likely that he will attack us.  He was raised to believe he is God.  Think about that.  He believes he can defeat anyone.  That makes him bold and dangerous.  What’s to stop him from launching a nuclear attack???  What is to stop him from starting a war that he believes he can win?  And, when he realizes that he is not GOD, what is to stop him from trying to take the whole world down with him?

I dealt with his kind.  The man who murdered three people and attempted to murder me is a lot like Kim Jong-un.  He believed he was God and when he faced the truth, he took me down with him.  He put me in prison for life for his own actions.  Trust me when I tell you that men like that can’t be reasoned with.  They are incapable of empathy or logic.

If you are not saved, you better start praying now before it is too late.  You never know what is going to happen in this world.  To my brothers and sisters in South Korea, Guam and all of Asia, my prayers are with you and GOD is with you.

I have a message for you, Kim Jong-un, and all tyrants and psychopaths who think they are GOD.  YOU WILL BE DEFEATED BY CHRIST!!!  You face GOD’s wrath and, should you attack, the weight of the world shall bear down on you and crush you under foot.  Fire will rain on you from the sky and scorch your lands.  You will wish that you had never been born.  You will beg for mercy, but your cries will fall on deaf ears.  Repent sir and kneel before the one true GOD or face destruction and an eternity of never ending torture.  This is a warning and a promise!

To all of you out there who are not saved, NOW IS THE TIME!!!!!
Please repeat this prayer and receive GOD’s mercy and salvation:  “Dear Jesus, I know that because of my sin I need Your forgiveness.  I believe that You died on the cross for my sins.  I believe You rose again so I could live with You.  I want to stop living for myself and start living for You.  I want Your peace in my life. I want forgiveness for my sins.  Please come into my heart and change my life.  I want to live with You forever.  I want You to be my Lord and Savior.  In Jesus’ name.  Amen.”
If you said it and you meant it, then you are my brother or sister in CHRIST and I welcome you to the path of light, the only road to Heaven.  If you are still on the fence, I urge you to make up your mind.  Think long and hard.  Your soul depends on it.  I LOVE ALL OF YOU!  WE ARE IN THIS TOGETHER!

I leave this piece of scripture to all tyrants and unsaved sinners:
Ecclesiastes 8:7-8  “For he knoweth not that which shall be: for who can tell him when it shall be? There is no man that hath power over the spirit to retain the spirit; neither hath he power in the day of death: and there is no discharge in that war; neither shall wickedness deliver those that are given to it.”

May GOD bless and keep you!  May you seek and find His salvation!  May the North Korean threat be neutralized swiftly!  AMEN!!!!
Love in CHRIST,
Randall
( A man who knows he is going to Heaven!)