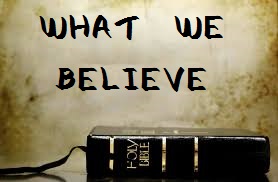 We believe the Bible to be without error. The Bible reveals God, spiritual separation of man from God, the way of salvation, and how to have a personal relationship with God. * II Timothy 3:15-16 – “…from childhood you have known the Holy Scriptures, which are able to make you wise for salvation through faith which is in Christ Jesus. All Scripture is given by inspiration of God, and is profitable for doctrine, for reproof, for correction, for instruction in righteousness,” * II Peter 1:20-21 – “Knowing this first, that no prophecy of Scripture is of any private interpretation, for prophecy never came by the will of man, but holy men of God spoke as they were moved by the Holy Spirit.“

We believe the one, true God reveals Himself in three distinct persons: God the Father, God the Son, and God the Holy Spirit. All three are co-eternal, co-powerful, and co-equal. * I John 5:7 – “For there are three that bear witness in heaven: the Father, the Word, and the Holy Spirit; and these three are one.” * John 1:1 – “In the beginning was the Word, and the Word was with God, and the Word was God.” * John 1:14 – “And the Word became flesh and dwelt among us, and we beheld His glory, the glory as of the only begotten of the Father, full of grace and truth.“

We believe that Jesus Christ is the Son of God, born of the virgin Mary. He lived a life without sin and is our example. * I Peter 2:21-25 – “For to this you were called, because Christ also suffered for us, leaving us an example, that you should follow His steps: “Who committed no sin, Nor was deceit found in His mouth”; who, when He was reviled, did not revile in return; when He suffered, He did not threaten, but committed Himself to Him who judges righteously; who Himself bore our sins in His own body on the tree, that we, having died to sins, might live for righteousness—by whose stripes you were healed. For you were like sheep going astray, but have now returned to the Shepherd and Overseer of your souls.“ 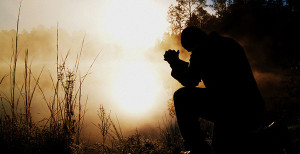 We believe that salvation is a free gift from God offered totally “by grace” and must be received through faith apart from any works, plus nothing and minus nothing. This salvation is a personal relationship with God found only by receiving Jesus Christ into your life. Salvation is by repentance and faith (truly being sorrowful for your sins, confessing that Jesus Christ died for your sins, and inviting Him into your life).
* Ephesians 2:8-9 – “For by grace you have been saved through faith, and that not of yourselves; it is the gift of God, not of works, lest anyone should boast.” * Titus 3:5-7 – “Not by works of righteousness which we have done, but according to His mercy He saved us, through the washing of regeneration and renewing of the Holy Spirit, whom He poured out on us abundantly through Jesus Christ our Savior, that having been justified by His grace we should become heirs according to the hope of eternal life.“

We believe in the visible and personal return of Jesus Christ. * I Thessalonians 4:16-17 – “For the Lord Himself will descend from heaven with a shout, with the voice of an archangel, and with the trumpet of God. And the dead in Christ will rise first. Then we who are alive and remain shall be caught up together with them in the clouds to meet the Lord in the air. And thus we shall always be with the Lord.“

We believe that those who receive Jesus Christ will go to Heaven and those who reject Him will be separated from the Lord forever.  * John 3:16 – “For God so loved the world that He gave His only begotten Son, that whoever believes in Him should not perish but have everlasting life.“ 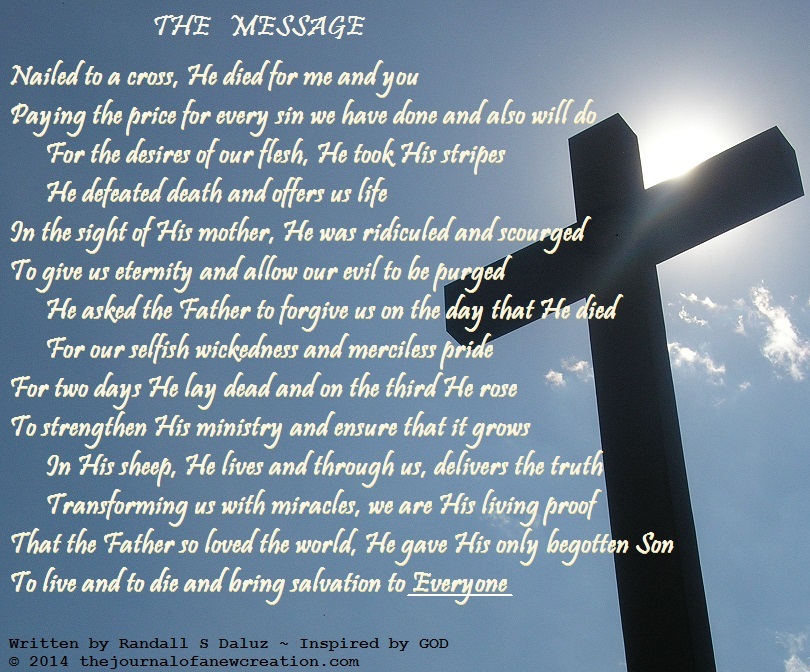 "What We Believe" / "The Message" Page
© 2014 thejournalofanewcreation.com All Rights Reserved
Written by Randall S Daluz