Solid As A Rock 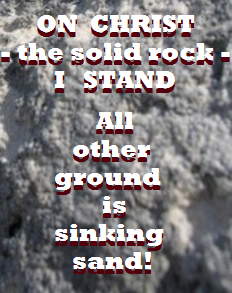 Luke 6:46-49  “But why do you call Me ‘Lord, Lord,’ and not do the things which I say?  Whoever comes to Me, and hears My sayings and does them, I will show you whom he is like: He is like a man building a house, who dug deep and laid the foundation on the rock. And when the flood arose, the stream beat vehemently against that house, and could not shake it, for it was founded on the rock.  But he who heard and did nothing is like a man who built a house on the earth without a foundation, against which the stream beat vehemently; and immediately it fell.  And the ruin of that house was great.”

Dear Readers:  Today is my first day of prison.  As I expected, I am in the super-max.  They say it is for my safety.  They have put me on the most restrictive level.  For now, I am being confined to my cell for 24 hours a day.  I am not allowed to use the telephone – which they say is for my safety.  I am only allowed to shave once a week and I can only shower 3 times a week.  My cell is small and as I look around, I can feel the suffering and loneliness which has no doubt been endured by many, many men.  There are blood stains on the ceiling, walls and floor.  They are signs of the depravity, which becomes some men, when their loneliness and pain overtakes them.  I am not, nor do I intend to be one of those men.  You see, I possess something that they do not have – the love of Christ.  The Lord is my Rock.  HE is solid.  I have built my house of faith upon Him.  Thus, my faith is secure and shall not fail me.

When I left PCJ, I left in peace.  I shook every staff member’s hand that I could.  I wished them well with great sincerity in my heart.  Though I disagreed with the judge, I showed him respect and bid him good day – even after he used pure conjecture to rationalize the barbaric and wickedly unjust sentence he handed down to me.  Because my faith is built on a solid foundation, the Lord put it on my heart not to ask the judge for leniency; For anything less than a new trial would be unjust for all Americans.  But, the Lord did put it on my heart to tell the judge that racism is not okay; that it should not be tolerated by a civilized society, nor should it have any place in the American justice system.  God said, “Son, use my name and say it with authority.” and I did as He asked because my faith is strong in Him.  It is built on Him and He is more solid than any other rock in existence.  When I read the beginning of my statement, my courage was small and I was in tears.  But, as I continued, Jesus filled me with strength and when I used HIS name, I did so with confidence because my faith is built on the Rock that is Jesus.  My brothers and sisters, build your faith on the Rock of all rocks – the most solid of foundations – JESUS CHRIST.  Amen!

Psalm 23
The Lord is my shepherd; I shall not want.  He makes me to lie down in green pastures;  He leads me beside the still waters.  He restores my soul; He leads me in the paths of righteousness for His name’s sake.  Yea, though I walk through the valley of the shadow of death, I will fear no evil;  For You are with me; Your rod and Your staff, they comfort me.  You prepare a table before me in the presence of my enemies;  You anoint my head with oil;  My cup runs over.  Surely goodness and mercy shall follow me all the days of my life; And I will dwell in the house of the Lord forever.