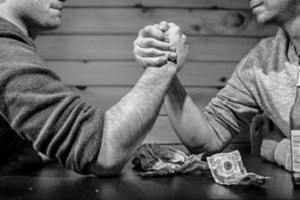 Dear Friends,  May God’s strength, power and light flow within you and guide you.  Amen!  It is always my intention to deliver the message to everyone.  And though I hope there is something to be gained by all in this one, I had a particular group in mind while writing this.  No offense ladies, but I am speaking directly to the men in this one.  Though, I do hope all the ladies learn from this as well.

Let us start by asking ourselves, “What makes a man?”  My earthly father always told me that men are built, not born.  You see, anyone can be born a male, but not every male becomes a man.  A man must be forged and wrought.  A man cannot be measured by physical strength or by his job or wealth.  In fact, I would be willing to wager that some of the wealthiest males on this planet are not truly men.  A man cannot be measured by how many women he slept with or how far he’s traveled; Nor can he be measured by his intelligence or worldly achievements.  No, sir.  There are plenty of males who have achieved great wealth and power who are or were by no means the definition of a man.  Adolf Hitler, for one.  You see, a man cannot be measured by how big his gun is or how many enemies he has trampled under foot.  The Pharoah from Genesis was not a man, yet he slayed many enemies in his day.  A man is not measured by his testosterone level or how many fear him.  Julius Cesar thought himself a man and he died in blind ignorance, fully convinced of his own superiority.

The greatest men who ever walked the face of the earth were truly the most humble.  A man can only be measured by his heart, by the content of his character and by the amount of love that he is able to exude.  It is the essence of our core that reveals us to be men or not.  Love, conscience, heart and faith – those are the determining factors of manhood.  I read a bumper sticker once which didn’t mean much to me then, but is overwhelmingly profound to me now.  It said: “Real Men Love Jesus”.  That there is the truth, brothers.  Do you want to be a rebel or tough guy?  Follow Jesus, brother.  His is the path least chosen.  I see all these young guys around me in gangs and such, revolting against society [or so they think] by breaking the law.  The funny thing is, they are going with the grain not against it.  I’ve got a news flash for all you so-called rebels, the majority of this world is crooked.  You are only making yourselves scum amongst scum.  If you really want to rebel against society, then you need to man up.  You hear me?  MAN UP!  Pull your pants up, quit being gang bangers and start being bible thumpers.  I’ve got to tell you, I am tired.  Lord knows, I am so tired.  I am currently surrounded by so-called tough guys locked in a ludicrous contest to try and prove who is more of a man, too ignorant to realize that being macho doesn’t make you a man.  They are a bunch of lost phonies.

Coming to prison didn’t make me a man.  Quite the contrary.  In fact, getting myself involved in the lifestyle I once led showed how much I was lacking in manhood.  The gospel shattered all of my false misconceptions about what it is to be a man.  You see, I thought that raising my children and feeding my family, alone, made me a man.  Without question, that is part of being a real man, but there is more to it than that.  A real man is not full of himself; he is full of love.  You’re not a man just because you pay the bills.  A true man can lead his family in all things, but most importantly, in spiritual matters.  A real man is a leader.  These macho males out there are not secure in their own manhood, thus they are constantly trying to prove themselves to others.  There’s nothing manly about that at all.  Do you know what makes me secure?  Jesus Christ!  It was He who made me a man.  If you’re lying, cheating, stealing, being unfaithful, committing criminal acts or lusting for money or power, then you’re not a man.  You are weak and you are blind and that is why you are always trying to prove yourself; because deep down inside you know that none of that makes you a man.  In fact, it strips you of your manhood.  My father and grandfather, as well as my stepfather, Bob, [all of whom are Christians] did their best to teach me how to be a man and I am still learning those lessons.  Real men never stop learning or growing.

You want to learn how to be a man?  Read the gospel of Jesus Christ.  Study His life on earth.  He is God, yet He was humble.  He is the realest man who ever walked this earth in flesh, yet He never raised His hand to anyone.  He was meek and gentle.  He never felt the need to prove Himself to anyone; For He knows exactly who He is and what He is about.  He not only loves His own, He loves everybody; For to Him all are His own.  A real man not only keeps Himself, but others.  His gospel is the blueprint for manhood.  A real man is not measured by how much he loves himself, but others.  It is because I love you so much that I am telling you to Man Up.  It is because Jesus loves us infinitely that He is willing to show us all how to.  I want you to study the gospel and then ask yourself, “Am I a man???”

Proverbs 3:19-35  The Lord by wisdom founded the earth; By understanding He established the heavens; By His knowledge the depths were broken up, And clouds drop down the dew.  My son, let them not depart from your eyes—Keep sound wisdom and discretion; So they will be life to your soul And grace to your neck.  Then you will walk safely in your way, And your foot will not stumble.  When you lie down, you will not be afraid; Yes, you will lie down and your sleep will be sweet.  Do not be afraid of sudden terror, Nor of trouble from the wicked when it comes; For the Lord will be your confidence, And will keep your foot from being caught.  Do not withhold good from those to whom it is due, When it is in the power of your hand to do so.  Do not say to your neighbor, “Go, and come back, And tomorrow I will give it,”  When you have it with you.  Do not devise evil against your neighbor, For he dwells by you for safety’s sake.  Do not strive with a man without cause, If he has done you no harm.  Do not envy the oppressor, And choose none of his ways; For the perverse person is an abomination to the Lord, But His secret counsel is with the upright.  The curse of the Lord is on the house of the wicked, But He blesses the home of the just.  Surely He scorns the scornful, But gives grace to the humble. The wise shall inherit glory, But shame shall be the legacy of fools.

May God bless and keep you!  May you Man Up and follow Jesus!  May you allow Him to make a real man out of you!
Love in Christ,
Randall
(A man in Christ only)