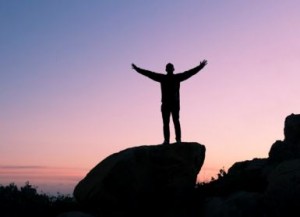 II Peter 2:19-21  “While they promise them liberty, they themselves are slaves of corruption; for by whom a person is overcome, by him also he is brought into bondage. For if, after they have escaped the pollutions of the world through the knowledge of the Lord and Savior Jesus Christ, they are again entangled in them and overcome, the latter end is worse for them than the beginning. For it would have been better for them not to have known the way of righteousness, than having known it, to turn from the holy commandment delivered to them.”
Dearly Beloved,  May the power and glory of the Lord forever surround you and flow through you.
I want to talk to you about liberty, or freedom, if you will.  When I was stuck in the mire of sin, I was under the illusion that I was free.  I had “worldly freedom”.  That there is not freedom at all.  It’s a lie, a trap, a pitfall and snare set for us by the devil.  I am imprisoned with all manner of men who believe they are free even in here.  It was once said that to experience true freedom, one will inevitably commit criminal acts.  You see, there are many in this world who look at law and order as nothing more than a restraint, a chain, if you will.  They crave anarchy.  Even in the deepest depths of my sin, there were lines and boundaries that I would not ever cross.  But, some folks have no boundaries and they think that makes them free.  Nonsense!  Poppycock! [I always wanted to use that word.  LOL]  Such beliefs are pure lunacy and they are a product of the devil.  They are the deranged cravings of our sinful nature, our flesh.  That type of freedom isn’t real.  When you live in sin, you are in bondage.  You are a slave to evil desires.  You are confounded by the devil.  Your life is meaningless and purposeless and that is why you feel empty.

People feel free when they get high, but what goes up must come down and they quickly realize that the high won’t last forever.  The good feeling is but a fleeting wisp.  It lasts only an instant and then, *poof*, it’s gone and they are left holding all the baggage that comes with sin.  You see, drugs distort reality and lower inhibitions, allowing people to sin freely until they are inevitably consumed by sin.  Sin is a prison.  There are all manner of sins which consume us.  I used drugs as an example because I have first-hand knowledge of them.  Let me tell you from experience that death or prison are the only ultimate outcomes of using or selling drugs.  It’s a trap laid up for us by the devil; one of thousands he has – sex, violence, greed, lust, envy, etc., etc. – the list goes on and on.  I felt trapped when I sold drugs.  I hated it.  It disgusted me.  I felt shame.  I knew it was wrong.  I wasn’t raised that way.  You see, I did it only to supplement my family’s income.  Every time I was unable to work, it was something I could fall back on.  The devil waited until my kids were hungry and going without and then he tempted and tricked me.  And like the sucker I was, I fell for it – hook, line and sinker.  He almost had my soul, but the Lord had other plans and He snapped that line.  He broke my chains, opened up my prison and set me free.  Hallelujah!  Praise God!  Shout amen!  Thank you so much, Jesus!

I want to let all of you know who are selling drugs or using them or caught up in other forms of sin – He will do the same for you.  Stop lying to yourselves.  There is no freedom in sin – none, zero, zilch, nada.  It’s one big fat lie – all of it.  Sin leads to death and destruction.  There is hope for you and Jesus is His name.  He is, by His very nature, true liberty and freedom.  He came to set the captives free.
Luke 4:18  “The Spirit of the Lord is upon Me,  Because He has anointed Me,  To preach the gospel to the poor;  He has sent Me to heal the brokenhearted, To proclaim liberty to the captives, And recovery of sight to the blind, To set at liberty those who are oppressed;”
He will unbind you, break your chains and destroy the prison of sin you are trapped in.  He will take you as you are.  The lifestyle I led was despicable and disgraceful, wicked and disgusting.  Yet, Jesus accepted me.  He saved my life from a bullet that was meant for me and then He saved my soul.  And, as I sit here, cleansed by His blood, I still can’t comprehend or fathom why He loves me so much; me, who once roamed amongst the dregs of society.  But, He does love me.  He truly loves me beyond anything that I have ever known.  He loves you too, just as much.  Let Him set you free.  Jesus is the key to that cell you’re trapped in.  I have said it before and I will say it again; Though I am physically trapped in prison, possibly for the rest of my earthly life, I am freer spiritually and mentally than I have ever been.  I never knew how liberating it feels to be free from sin until now.

Make no mistake, folks, I still struggle with sin.  I still sin daily, but I am so far from the man I was.  I do not live the way I used to.  I am no longer a slave or prisoner of sin.  You know, I lost a lot.  I would be lying to you if I didn’t tell you that I still cry at times for my children and loved ones.  I still struggle with regrets and what ifs from time to time.  But, you know what?  I have gained so much more than I lost.  I have salvation and true liberty.  And, I have no regrets in that regard.  If they told me to renounce my Lord and give up my salvation in exchange for my release from this state prison I am in, I would refuse.  In fact, I could have taken a crooked deal and not have spent the rest of my life in here, but I didn’t.  And, I am glad.  Making that crooked deal would have been like making a deal with the devil.  I do hope that my wrongful conviction will be overturned someday.  And, if it’s God’s will, it will.  But, no amount of earthly freedom is worth doing something evil.  You see, by accepting that crooked deal that the state offered, I would have been putting those chains of sin right back on.  The Lord opened my eyes and let me see that and though I may die a physical death in prison, I am so grateful that He did.

That’s how powerful of a change that the Lord has made in my life.  He helps me stay focused on what is truly important.  Eternity in the Kingdom of Heaven – that’s where true liberty and freedom lies.  This so-called “freedom”, which is the product of sin, is an illusion.  It’s smoke and mirrors, folks.  It’s not real; it’s fantasy.  I get so frustrated because most people I try to reveal reality to are just too blind to see it.  They think I am the fool for believing in Jesus.  They giggle and snicker.  They think that I am the one living in a fantasy.  The devil is cunning.  He is good at pulling the wool over people’s eyes.  Even the guys in here that I speak to… here they are paying the penalty for their sins and they still can’t see the truth.  Some continue to sin despite the price they pay for it.  A few have even convinced themselves that being in here is cool.  Fools!  And, they call me crazy.

Death and destruction are fool’s choices.  Don’t be a fool.  Open your eyes, accept Jesus and be free.  And, don’t be fooled by the fact that you don’t break the law of the land.  You can be crime-free and still be a slave to sin.  Many sins are lawful in man’s eyes.  That is another trick that the devil plays.  He causes some of us to become self-righteous which is a sin unto itself and another means of blinding people.  Jesus loves you.  Do you hear me?  Jesus – Loves – You.  He is the key to the lock.  Let Him release you.  Don’t be a fool.  Read the gospel and remove the blindfold.  Come out of the darkness and into the light.  I know what it is to be a blind fool.  I was once chief among such.  “I once was lost, but now I am found; was blind, but now I see.”  Hallelujah!  Glory to God!  I want the same for all of you.
Please pray this prayer if you want to be free:
“Dear Jesus, I know I am a sinner, and I ask for your forgiveness.  I believe you died for my sins and rose from the dead.  I want to stop living for myself and start living for You.  The best way I know how, I trust you as my Lord and Savior.  Please come into my life, guide me and help me to follow You.  In Jesus’ name.  Amen.”
If you said it and meant it, then you are now free.  And, slowly but surely, the truth will be revealed to you.  I love you so much my brothers and sisters.  Do not be foolish.  Remove the chains of sin.

May God bless and keep you!  May you no longer be blind!  May you let the Lord set you free and know true liberty!  Amen!
Love in Christ,
Randall
(A man who is truly free in Christ)